1979 GMC Sierra Classic - 2nd Owner I had driven my 1972 Pontiac Grand Prix to a local restaurant for dinner. As I was looking out the window at the Volkswagen dealer across the street I noticed a 1979 GMC truck on the lot. This intrigued me (since I had been looking for a truck recently) so after my meal, I went to look at it. The salesman stated they had just gotten the truck as a trade in for a new VW. The original owner had the truck specially made for him & decided he didn’t like it ... read more >>

My Dad's 1993 S10 This truck was purchased in California by my uncle, when he passed he left it to my Dad. When my dad passed it was given to my brother as you can see before I got it from my brother for $500 it had been through the paces. I'm trying to bring it back to glory and your site is helping me get it there.

In 1992 I was 18 years old. I live in the country in Robinson County Texas. As I drove by I saw a headlight covered by a bunch of junk in this old lady‘s backyard. So I stopped by to see if it was may be a truck. And low and behold it was a 1966 Chevy. When I asked the older lady how much she would sell the truck for she told me I could just have it for free. I insisted that I need to at least give her some money for the truck I could just ... read more >>

The truck was headed for the junkyard. I repaired it with LMC Parts, thank you!

A 1965 Chevy Truck found in Chicago-US and sent to Sao Paulo-Brazil I bought this pickup truck in 2012 when I was living in Houston-TX. I found it in e-bay and it was in Chicago area. A couple of years later I had to leave USA so I put the truck in a container and exported to Brazil. In Brazil we cannot import used vehicles but for vintage and original ones there is a special process for doing this. I was lucky that the person I bought the truck from had worked on refurbishing the engine and gone throughout ... read more >>

Trouble Maker Well here goes first a little background we (Susan) and me (Rocky) met about 30 years ago and it just clicked the cosmic tumblers though were not inline for us yet due to other relationships so over 30 years we stayed in touch. So about 2 years ago I was having a party at my house in the country we were talking about our lives and how we had never been happy she comes right out and says I need you to rescue me, I accepted. The first year we spent mostly on my touring bike (Harley ... read more >> 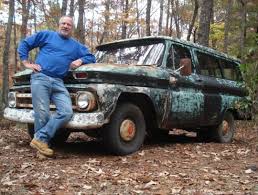 Rescued '66 Burb I believe that this 1966 Chevrolet Suburban originally was used by the United States Army, because it has olive drab paint in the door jambs, and has a government contract number on the VIN plate. It was found abandoned in the woods near Dothan, Alabama, and It is very likely that this vehicle was used at Fort Rucker, because is located near by.. It has the original 292 inline 6, and a SM-420 transmission. I checked the numbers, and they matched! The icing on the cake is that it only has 64,704 miles on the odometer, ... read more >>

I bought my S10 Blazer Sport new off the showroom floor 35 years ago from a local Chevy dealer. Had it Ziebart rust proofed and sun roof installed soon after. Excess of 210,000 miles (approximate the odometer broke years ago) Original except for Jasper crate transmission, Choo Choo automotive hood scoop, vinyl body graphics and later model Blazer wheels. Thanks to LMC trucks I’ve been able to keep it looking original and on the road all these years. It’s amazing how they’re inventory of replacement parts has grown since I got my first catalog over 15 years ago. ... read more >>

GMC 1948 RIGHT HAND DRIVE It all started on a Saturday evening late in December of 2016. After drinking a lot of South African Castle lager, we decided to build a V8 street rod. We then purchased this barn find from another trucking company, who were very reluctant to sell this 1948 GMC pick up truck. The vehicle was in storage for 16 years, as the previous owner wanted to build it up for himself. Our build started in January of 2017. We purchased a brand new 350 Chevy engine and gearbox from Thundersport in South Africa. All the ... read more >>

Silverado 10 1977 My mother and father picked this truck out years ago. My dad and I have been working together on this truck for about 10 years now. We enjoy all we do to it! Hope y’all enjoy it as well!!