My dad purchased his Ford F150 4×4 in September of 1977 for around $5,200.00 and that included the Mag wheels and a Northman snow plow.  The truck came with the 400M engine and “Granny Low” drive gears.  He bought it just in time for the blizzard of 1978.  I know that because I had just turned 10 years old.  The blizzard kept me out of school for 2+ weeks.  Those weeks were spent next to my dad in the seat of that truck.  We plowed snow all around central Illinois.  Our neighbor owned a trucking company and there was no shortage of work for Ol’ Red.  That old truck was my dad’s daily driver until he retired in 1995.

The truck continued plowing snow every winter until the spring of 2017.  It was then that dad decided to “freshen up the old girls lipstick”.  My dad did some labor trade with a neighbor (built him a pro grade paint booth) with the understanding the neighbor was to do the paint work on the truck and dad would pay for materials.  By the summer of 2017, they both realized the old truck needed more than just a paint job.  It needed to be restored.

With that knowledge, they both started tearing it down.  The neighbors shop was filled with parts.  Dad decided then that he was going to take his time and “do it right”.  And he did.  They tore that truck down to bare metal.  The frame was completely sand blasted, primed and rust proofed.  The engine was rebuilt, MSD ignition added as well as a 4 barrel Holley carburetor and new headers.  He desperately tried to find highway gears for the truck.  The truck’s current gearing would only net around 9 mpg.  They added a splitter that would change the final gear ratio and add another shifter on the floor as an overdrive.  It was that change that gave me the inspiration to call it “The F-3 Shiftie” for the 3rd shift lever on the floor.  A Vintage Air unit was installed.  The original truck had the vinyl bench seat, no air, and just an am radio.  The radio was upgraded to a single din with pull out screen that has GPS navigation, backup camera, and Bluetooth phone connectivity.  A new headliner with speaker system was also added.  Carpet, door panels, handles and knobs were all replaced. (LMC Truck played an integral role in this endeavor.)

When it finally came time to paint the truck, dad made the decision to keep her red.  It took over $3,000 worth of primer, paint, and clear coat to finish the truck.  The truck took 2 coats of paint and 3 coats of clear coat to finish.  Needless to say, the F-3 Shiftie will no longer plow snow.  Before the bed was finished, they added a roll-on bed liner.  The old bed rails were removed, powder coated, and painted.

With time (4 years) and lots of love, the rebuild is complete.  This 1978 Ford F-3 Shiftie is now a family heirloom that will be around for generations. 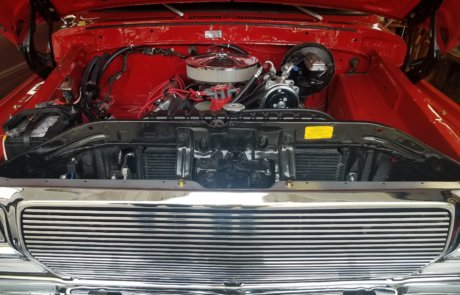 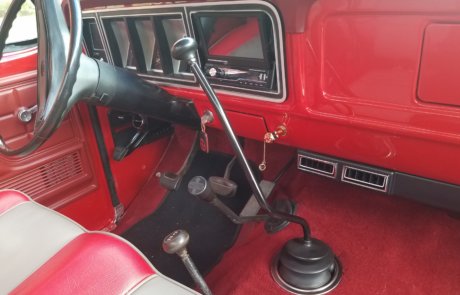 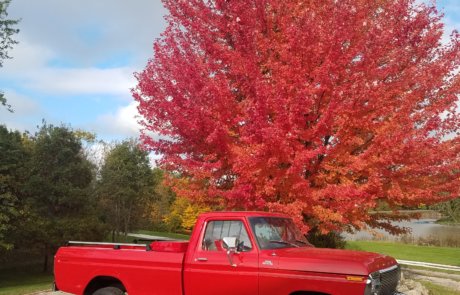 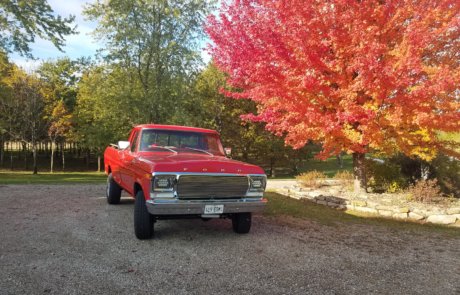 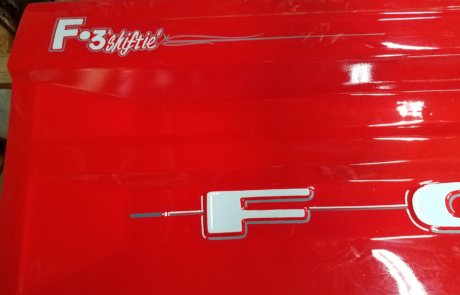 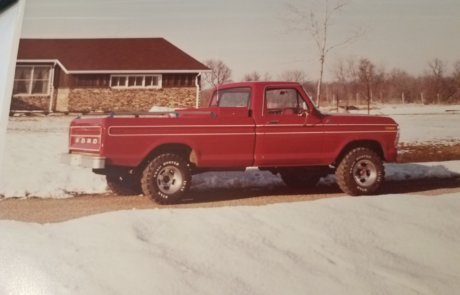