My name is Brenda.  My husband, Ernest, and I would like to share our story of Old Blue, a 1951 Chevy 3100.  We also want to thank LMC for making great parts for my project, and James (Bozo) at Bozo’s Garage and Rod Shop in Santa Rosa N.M.

We bought a Ranch in the Santa Rosa N.M. area 32 years ago. When we needed a mechanic, Bozo’s Garage came highly recommended.  Don’t let the nickname fool you.  That’s his childhood nick name, and that’s another story .

It was a good recommendation. He not only does excellent mechanic work– he stands behind his work and he has been doing our vehicles repairs now for 32 years. In time we became aware of his restoring old cars and trucks and the amazing work he and his crew does. We went through his car museum on old Route 66 and saw the amazing, fantastic job he did in restoring old car and trucks. So when we got Old Blue, a 1951 Chevy 3100, back from my childhood farm, we asked Bozo if he would be willing to restore Old Blue for us. We did not want anybody else to do the work because we knew Bozo would do it to perfection. We were not disappointed at all. Old Blue is even more beautiful than when it was new.  Thanks to Bozo. Keep up the good work, my friend.

This the story of old blue as I remember it, or more accurately, as I remember it being told to me. At least in the very early years as I was only five years old when old blue became a part of my family. Old Blue is a 1951 Chevy 3100 pickup.

My dad, W.I. Miller purchased Old Blue in November 1951, paid $900 for her.  He brought it in Clayton N.M. One thing I remember very clearly is my mother giving me a grocery list to run and take to my dad as he was going to Clayton to purchase supplies for the farm. Well, I did as I was told and my dad had to stop very quickly because I ran out in front of moving vehicles.

My dad died in March of 1951.  My Mother, Goldie, still had 5 children left at home to finish raising.  I was the last of eleven children.  The little farm/ranch was not yet paid for and the fall of the first year of my dad’s passing, she had only 11 calves to sell.  They brought only $40 per head.  She milked cows and sold cream, and borrowed $1,000 at farmer Ad Stockman’s bank in Clayton N.M. each year until she finished paying for the land. The bank loaned her money at 10% interest and took the interest money off the top so she was left with $900 note. She paid it off each year and borrowed again. My brothers continued to farm for a couple of years, but that’s not profitable because of droughts. My mother raised a garden and canned for the winter and we ate fresh fruit and vegetables in the summer. We ate lots of green beans and then she would let them mature and we had pinto beans for all winter.

Old Blue was the only vehicle we had for 12 years. I learned to drive on Old Blue. My mother had learned to drive on Old Blue after dad passed on because back then the men did all the driving. My brothers drove when all of us went anywhere. When my mother drove I sat next to her and Old Blue’s four on the floor. I would put my hand on the gear and shift gears. So I learned how to shift gears before my older sisters, all through my adolescent and teenage years. Always there were we three girls as we were referred to, and mother. When the boys went, there were at least five in the cab. In summer months we rode in the back. there were no laws against that back then. In December of 1963, my senior year in school, my mother bought a 1964 Chevrolet car. It was not nearly as much fun to drive as Old Blue. And I got married right out of high school, so I did not build a relationship with the brown car.

Time went on, and in 1971 my mother bought a red Chevy pickup, and Old Blue was designated for use on the ranch only. I think Old Blue’s feelings were hurt. But then at some point, in the ’80’s my mother gave Old Blue to my younger brother and he used it for a while.  He was employed with the county, grading roads. He pulled Old Blue behind the road grader and took Old Blue home after work. When he quit that job, at some point mom got Old Blue back and it was registered to her in 1980. Somewhere in the early 80’s, she gave Old Blue to my sister Joy, and her husband Doyle. They had plans for heir son to restore Old Blue, but Craig became disabled and plans for restoration did not come to pass.

In November 0f 2018, Ernest and I bought Old Blue from Joy and Doyle and had her restored and modified by our friend James ( BOZO ) Cordova at Bozo’s Garage in Santa Rosa N.M. She no longer has four on the floor and she does now have air conditioning, power steering, power brakes and drives like a a dream.  It has two tail lights, and mirrors on both sides. Now we are enjoying old blue as it is somewhat of a daily driver, and she is not a ranch work truck.

Thanks to James (Bozo) and crew at Bozo’s Garage in Santa Rosa N.M. And parts from LMC truck parts. 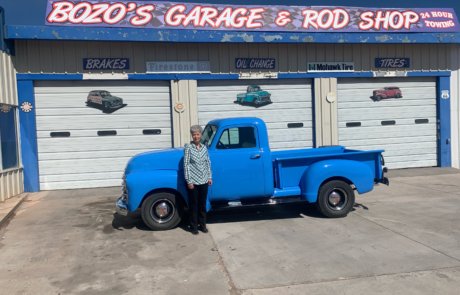 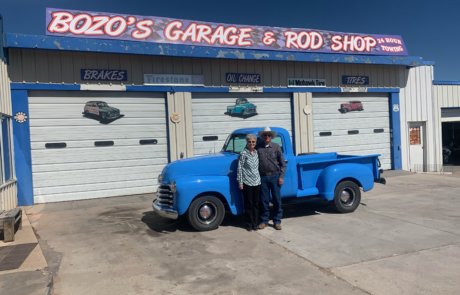 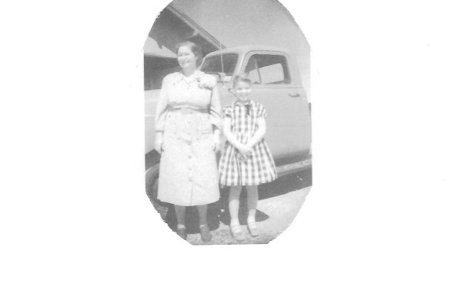 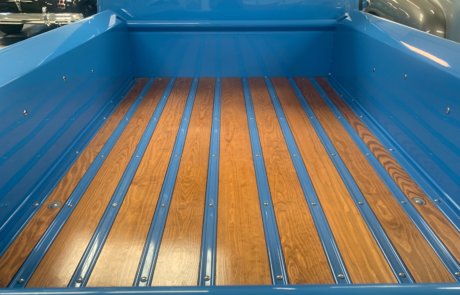