This is a story about my husband’s truck. This is Marilyn’s Story.

For as long as he could remember, Eddy had his eye on a 1971 GMC step side pickup. It rested on blocks at Performance Auto and Marine in Chickasha, Oklahoma. It was just a shell of a truck – no wheels, tires, transmission, or engine. It didn’t even have seats or a steering wheel. The telephone pole imprint embedded in the grill was evidence it had suffered a collision, which would explain the missing hood. Despite its imperfections, Eddy saw potential and every time he and his dad drove by the shop, Eddy looked to see if it was still there.

At age 14, Eddy convinced his dad to drop by Performance Auto and ask the owner, Garry Snow, if the truck was for sale. Garry said he planned to run it across the scales at the Dog Leg Salvage Yard that week. He thought he would get about $50 for the scrap metal; if they were willing to pay that, then the truck was theirs. With the money Eddy earned roofing houses for his uncle, he happily forked over the cash.

The truck was hauled and stored at another uncle’s mechanic shop, and for the next two years, Eddy and his dad scouted local salvage yards for parts. Piece by piece, the truck was reassembled and slowly brought back to life. However, the build was far from perfect. Although Eddy did his best to straighten the grill, the telephone pole imprint was still clearly visible. It was missing the tailgate, and the wooden liner was so eroded, you could literally see the ground through the rotted holes. The transmission and engine were the final two components needed to complete the project, however, finding ones that fit Eddy’s budget proved challenging. Luckily, both became available the day his dad wrecked the family’s 1964 Chevelle. The car was no longer drivable, but the transmission and motor lived on in Eddy’s ‘71 GMC.

The blue directional wheels and white-letter Daytona Radial tires Eddy bought from Ralf & Sons Tire Center complemented the cheap $400 blue paint job. It was not the prettiest or safest build, but by the grace of God, it passed inspection and was ready to drive just two days before Eddy’s 16th birthday.
Eddy drove and street-raced his ‘71 GMC until he joined the Air Force at the age of 18. On December 26, 1991, Eddy parked his truck in his dad’s backyard and handed over the keys with the promise he would return soon to reclaim her. He had no way of knowing at the time that this agreement would eventually land his dad in the Grady County jail.

Twelve years of neglect and rodent invasion took its toll and in 2003, an Enforcement Code Officer told Eddy’s dad that the unsightly truck needed to go or else it would be impounded. His dad informed the officer that he had no intention of getting rid of the truck, as it belonged to his son who was currently fighting the war in Iraq. Furthermore, he said, if the officer ever stepped foot on his property again, he would shoot him. Now, threatening an Enforcement Code Officer was obviously not the proper way to handle the situation and his utter lack of judgement cost him an entire evening in a cold jail cell. The next morning when he went before the judge, he provided the same explanation (minus the threat) as to why he was not going to move the truck. Although the judge did not approve of his misconduct, she dropped the charges since the vehicle was indeed owned by a military member deployed to a war zone.

Eddy honorably served our country for 20 years and retired from the Air Force in 2011. He planned to return to Oklahoma and retrieve his GMC soon thereafter but found it difficult to take time away from his new job. Therefore, in September 2014, his dad hauled the truck from Oklahoma to be reunited with its original owner. Eddy was shocked to see how much it had deteriorated over the years. All four tires were flat, and it had been overtaken with animal waste, nests, and tree remnants. Critters chewed through the wires and left massive holes in the seat cushions and carpet. Eddy immediately began nurturing her and for the next three months, he called his dad every Sunday to brief him on the progress and his vision of turning the ‘71 GMC step side into a ‘68 Chevy short wide bed.

Sadly, on December 10, 2014, the phone calls came to an abrupt halt upon learning the devastating news that his dad passed away due to a massive heart attack.
For 7 years, this restoration project was a weekend escape for Eddy. From mechanical to electrical, to paint and body work, he accomplished every bit of the work himself. Though he executed this project solo in our garage, I am confident my husband was never alone. Just like all those years before, my father-in-law was right there with his beloved son – building, smiling, and encouraging. And when the day came to take Marilyn for her first joy ride, he was right there, riding shotgun. 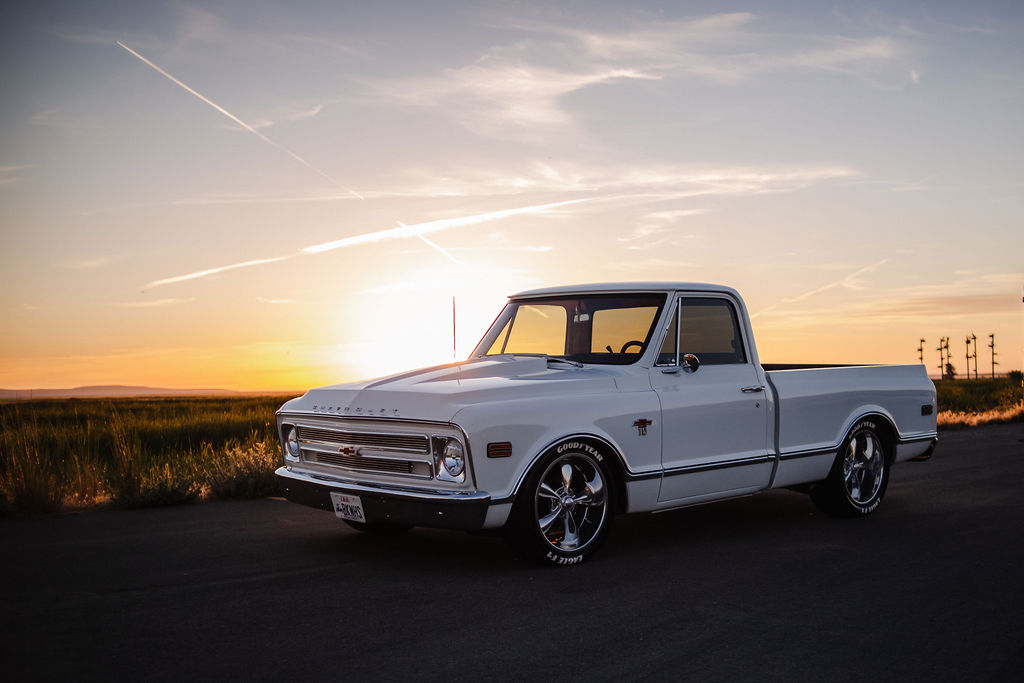 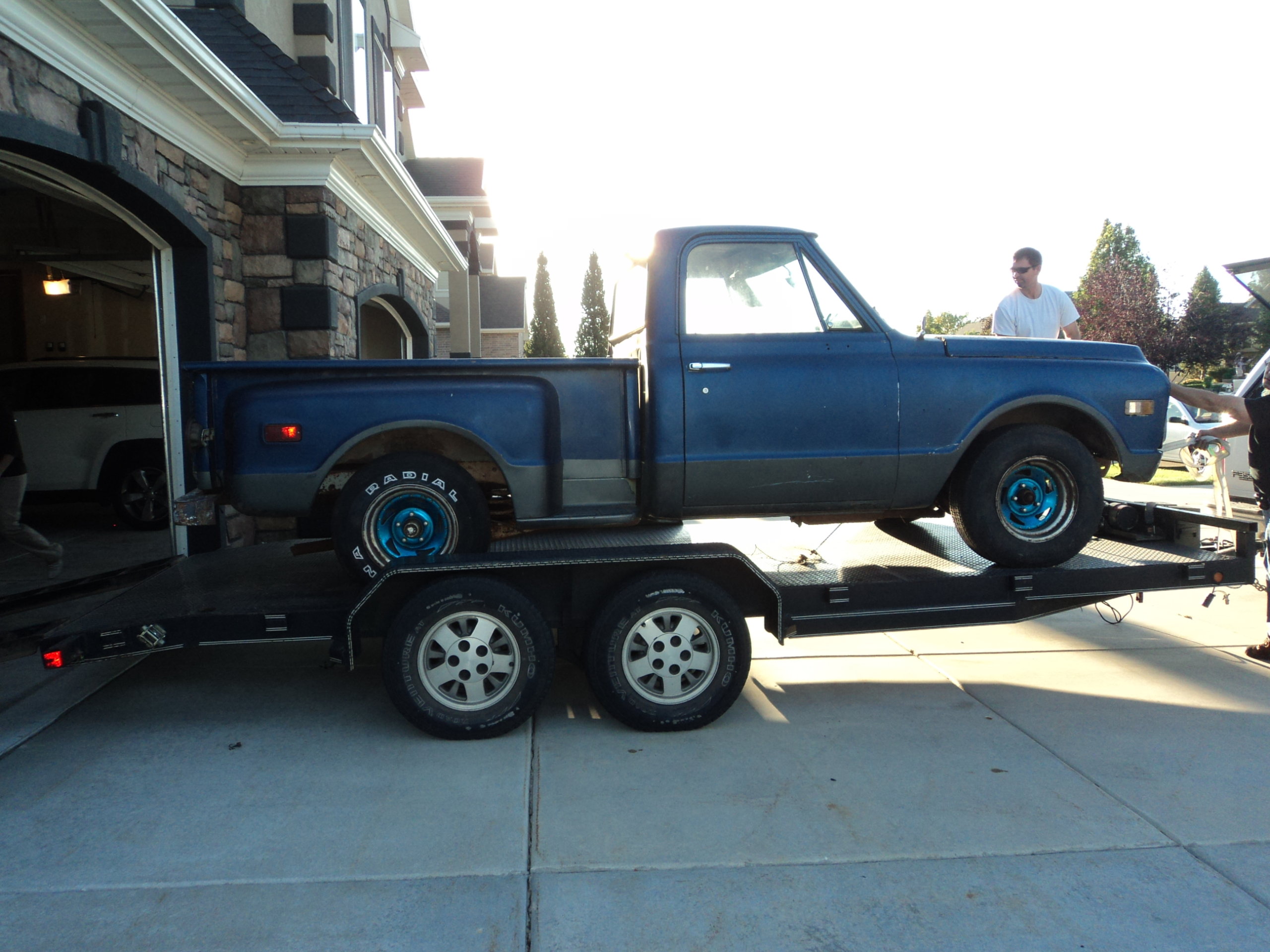 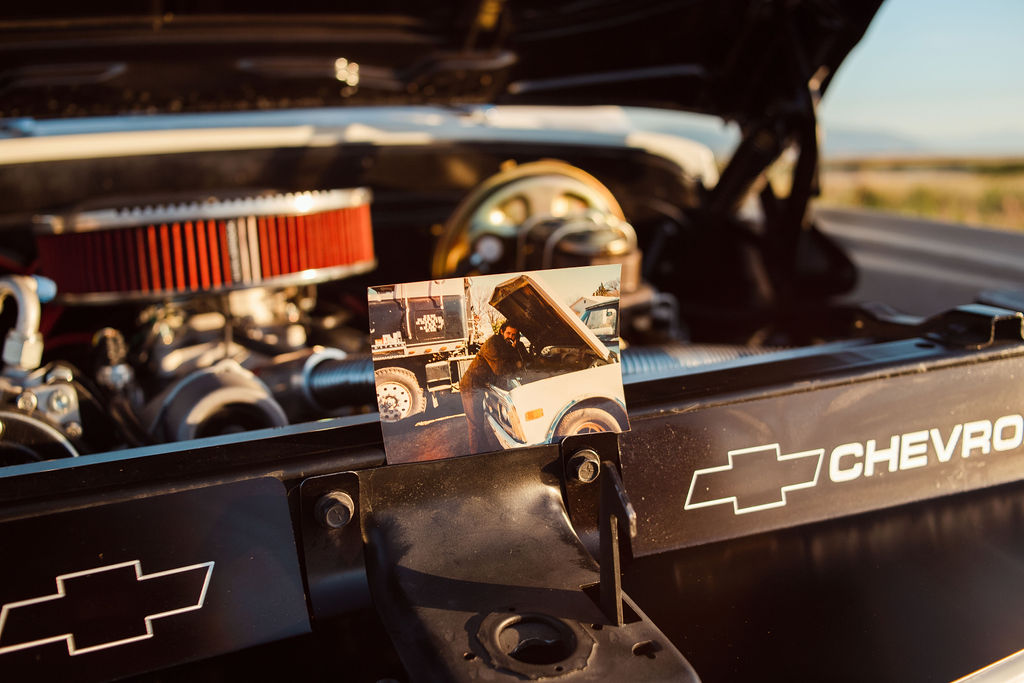 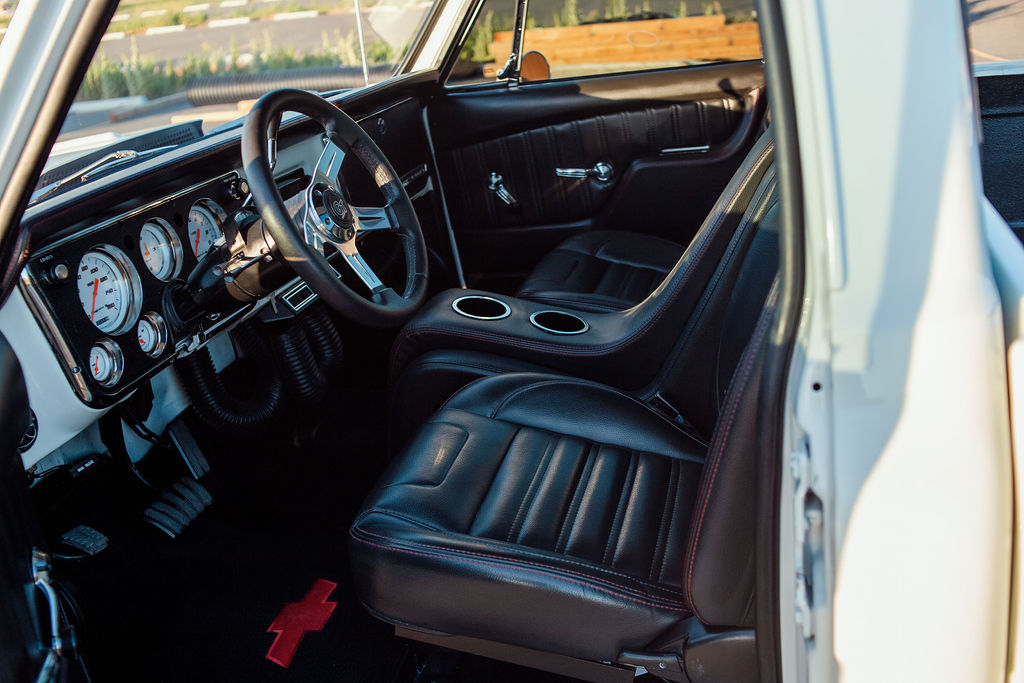 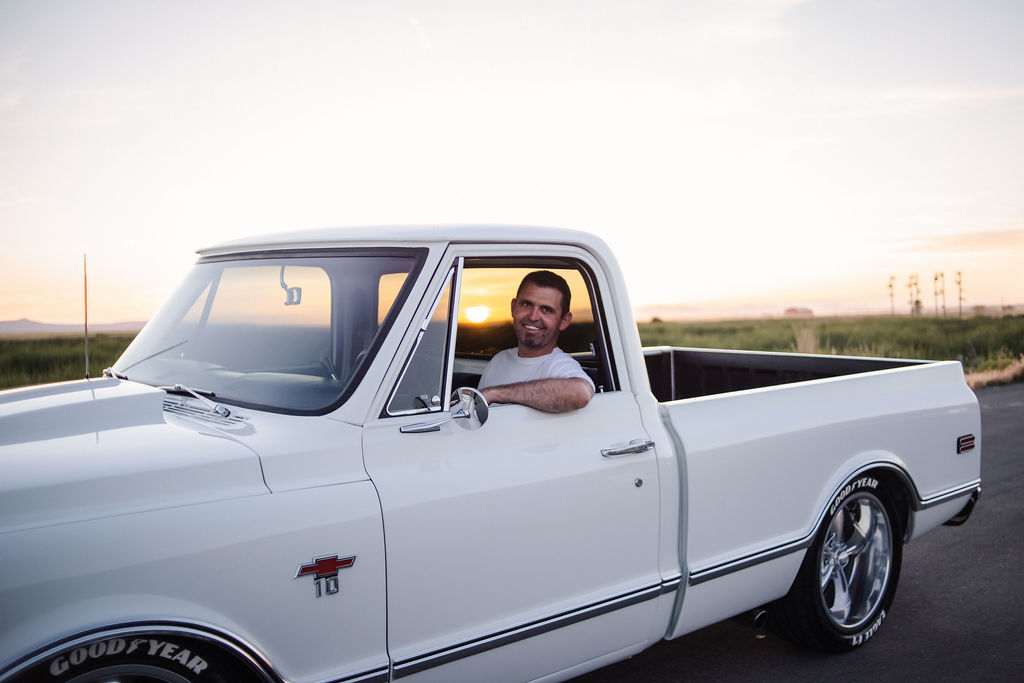 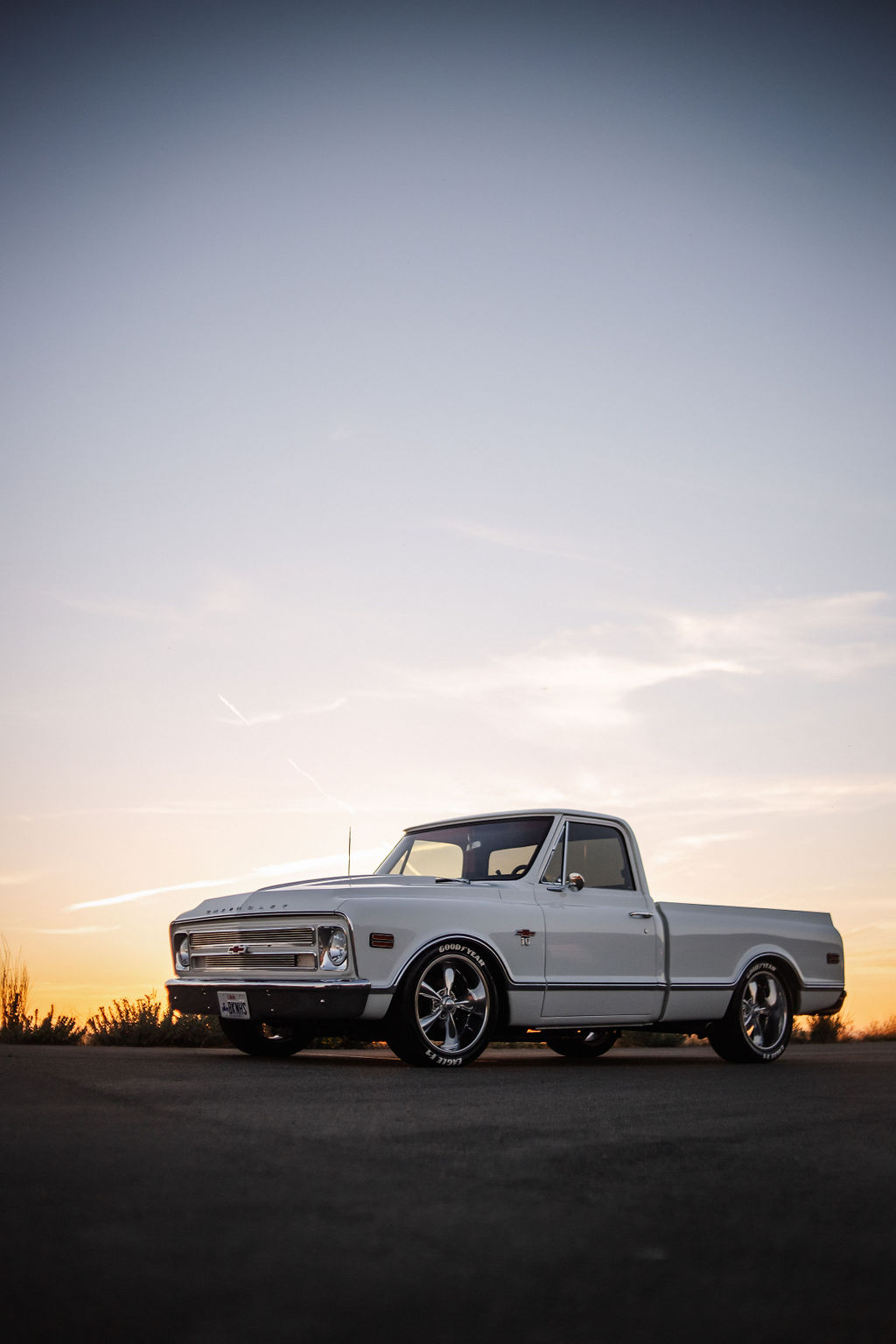