Sarge is my name! (1964 Chevy Short bed pickup) My pickup has had quite a life story. I am not quite sure of the first several years of life, but there was an accident at some point in those first years. We didn’t find out until we did a complete restoration in 2019-2020. After the accident was fixed, the 64 eventually made its way to my grandfather. My grandfather in turn, gifted it to my dad for a wedding present for him and my mom! Sarge was well loved and well taken care of! My parents drove it around as their daily driver. Then, another accident occurred as my dad was t-boned in it. He fixed it back up and off they went again! Eventually, as our family grew and couldn’t fit anymore, the less it was driven until eventually, it sat. The older I became, the more interested I became in making it mine and bring it back to life as a daily driver! I turned 14 and began to slowly work on getting it running again! I convinced my dad that I was serious after teaching myself to work on it! So I got his help and he taught me more! We began to work on the 64 together and that became our project!! Fast forward a few more years, I signed up for the military and attended basic training summer of 2002; my senior year, we had it running and began the body work and I successfully drove it my senior year! Summer of 2003, I left for AIT and my dad and brothers worked more on the 64! They hired the motor work done. With work being done slowly on my 64, I was happy, but happier in the military life. I then volunteered to deploy with another unit and that’s when life began! I met my husband on that deployment! We soon had two boys and work was put off longer on my pickup. Unfortunately, it had to sit again for another 4 years. 2010 came around and we wanted our boys to get to enjoy my 64! My husband was a mechanic/machinist, so he began to help me and found out why the motor never ran right! We drove it around again for a while, then another move came up and once again, we stopped work on my pickup. Skipping on to the end of 2019, we are finally settled in our place for 7 years now and our oldest boy is getting ready to drive and he says, “We need to get mom’s 64 running again and just finish it once and for all!!” We said, “Ok! Let’s do it!” We all 4 worked on it every night and weekend until we finished it! As we worked on it, we came up with the color and name! Both our boys worked hard and enjoyed the hard work they put into Sarge!! Our boys still talk about the things they learned and the experience they had working on it! My husband and boys built a vortec 350 and put in a turbo 350 automatic transmission. We sandblasted the outside and had to replace the two front fenders. The color is just a color match Army olive green. The inside of the cab was all hand sanded by myself and our youngest boy! Then we painted it onyx black. The bed is pine with an ebony stain. LMC truck was where everything was ordered from other than the two fenders and bed strips, where we ordered from Mar-k. We drive Sarge all the time! Sarge isn’t an everyday driver as we have collected 1960-1966 pickups, so we have a variety to choose from, but at least once a week Sarge is out on the roads! Our boys even get to drive and enjoy Sarge! 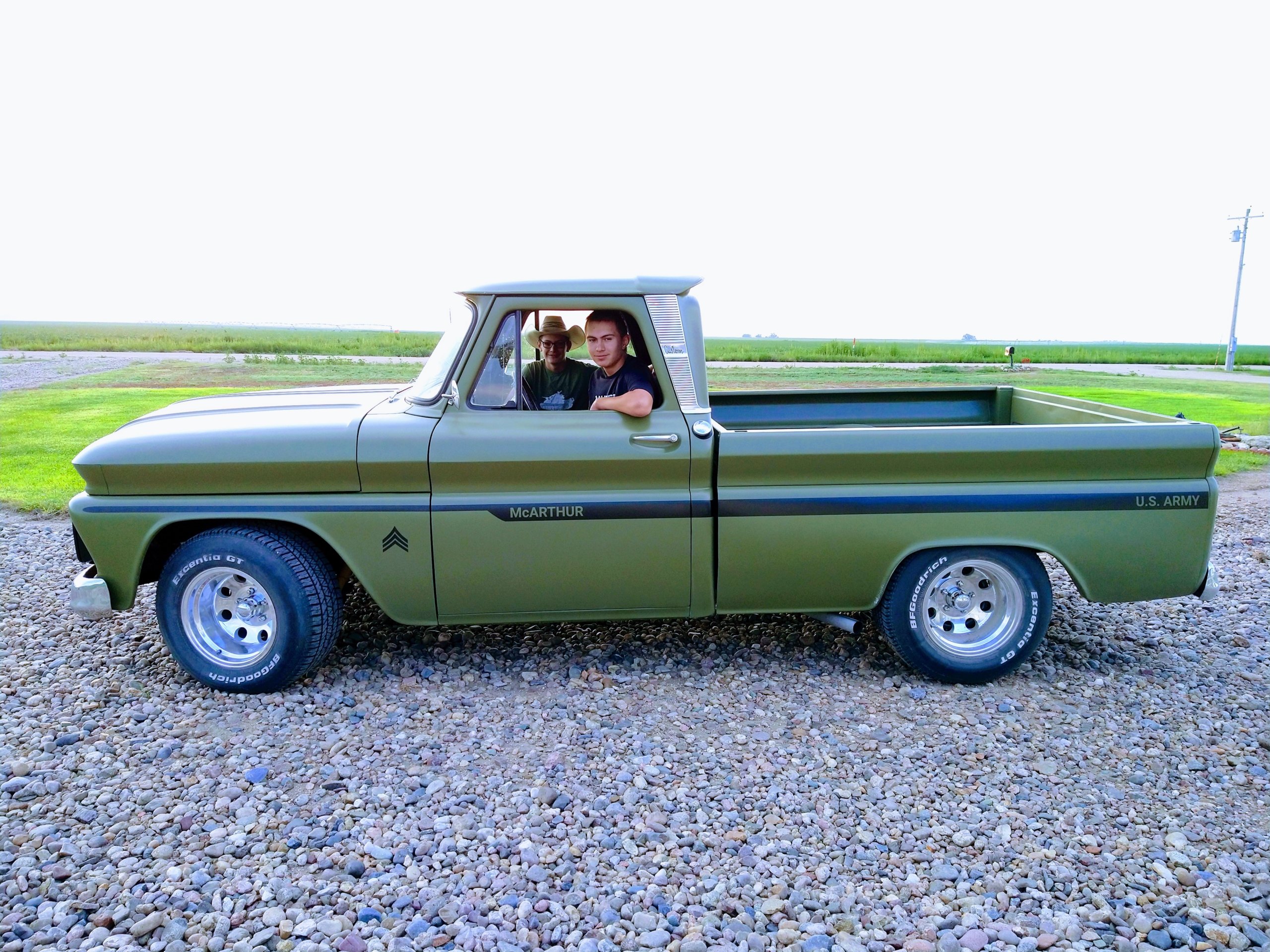