I purchased this 1984 2wd Ramcharger from a long time owner in Kentucky. It was in excellent condition and figured I would just lower it. Add some current wheels and tires and drive it to cruises and an occasional car show. Well like most car guys I couldn’t leave well enough alone. The Ramcharger had turned over 100,000 miles and the 318/727 combo was tired. I weighed the options of rebuilding the 318 doing a warmed over 340/360 or maybe a GEN III hemi swap. Well I reached out to my Mopar buddies and came up with a cost for the rebuild or 340/360 swap the numbers just got higher and higher. Well the GEN III started looking more viable. I started looking for a donor engine to see if the cost was comparable. I was surprised at what I was seeing high mileage relative cheap but low miles was not cost effective. My luck turned one day looking through Marketplace on Facebook. I saw a 2015 5.7 with the 8sp for 2,000.00 4hrs away. Talked to the seller made arrangements to view the engine/trans. Well once I got there there were a few issues that subtracted $400.00 from the price and like that I owned a 45,000 mile 5.7 with 8sp for $1600.00. For that price I could afford the Chrysler crate kit ECU control system and the Sound German Engineering 8sp TCU system. In December of last year I started the swap. Removed the original engine and got ready for the install of the GEN III. Purchased Bouchillon Performance GEN III to truck front motor mounts and set the engine in place so that fabrication of the transmission crossmember could be accomplished. Once that was accomplished I turned my attention to installing a 2018 Camaro radiator/fan system to keep the hemi cool. I then started all the various engine sending units to run the factory gauge cluster so didn’t have to install aftermarket gauges Then it was time to drop the 36 gallon tank and install a Tanks INC in the tank fuel pump. Plumbed the system using a corvette fuel pressure/filter regulator. Installed the ECU system wiring and computer under the hood. The 5.7 came from a Challenger that had electric power steering. That meant no power steering pump. Time to tackle this issue. I had done some research and found that a normal type II power steering pump designed for a rack might be too much pressure for the 36 year old standard steering box. I searched the internet and found that the 1999 Jeep Wrangler pump was type II and they had conventional steering boxes installed. Fabricated a spacer to align the pulley on the pump and all it to bolt to the head in the idler pulley location and just like that one more problem accomplished. Time to turn attentions to the transmission system. The 8sp uses a modern style shifter. a shifter like the standard Challenger could be used but would look somewhat out of place in the Ramcharger. I sourced a knob style shifter from a Durango and placed in the center cup holder in my center console. It actually looks pretty good there I feel. Built a false front in the center console and installed all the wiring and computer for the transmission out of sight. Time to work under the car for driveshaft and exhaust. The 8sp normally uses a CV style coupler to turn the drive shaft because it doesn’t need to plunge with the independent rear suspension on the Challenger. With a conventional differential, the drive shaft must be allowed to move fore and aft solution a driveshaft with the plunge feature built in. A Sonnax drive fork adapter was added to the back of the 8sp that allowed 1350 style ujoints to be used. The drive fork on the differential was changed to accept the 1350 u joint and now I could measure for a new driveshaft. Contacted Shaftmasters for a 3″ aluminum driveshaft with plunge feature. Last problem exhaust. Because this vehicle originally came with catalytic converters the exhaust shops in my area wouldn’t touch it without putting cats on. Someone recently in the area got a HUGE fine so they were gun shy. They did agree to bend up tailpipes so it was up to me to fab the forward pipes. I obtained some Summit Racing welded turbo mufflers and some 2.5 tubing and mandrel bends and set off to fabricate. Tig welded the pipes added a crossover and the exhaust was done. One of the most perplexing problems was going to be a speedometer. The Ramcharger had a conventional cable system the 8sp was a electric so a solution was needed. Research showed that there were some units that take electric signal and spin the cable but they are pricey. Solution was a early 90’s truck speedometer that was electric grafted to the 84 cluster. That was a bigger problem than it seemed. After some major surgery it was accomplished. This gives an original appearance to the instrument cluster also. The speedometer is driven by the Transmission controller and is programmable so a few test drives and it was up and working. Since the swap has been performed about 800 miles of driving have been accomplished and it’s a delight to drive. Acceleration is eye opening with the roughly 375 horsepower and the 8sp spinning 8.23 gears in the rear it gets the big Ramcharger up and moving. The 0-60 time is about 5.4.I would like to thank my wife all the support during this swap without out her support this would have not been possible. 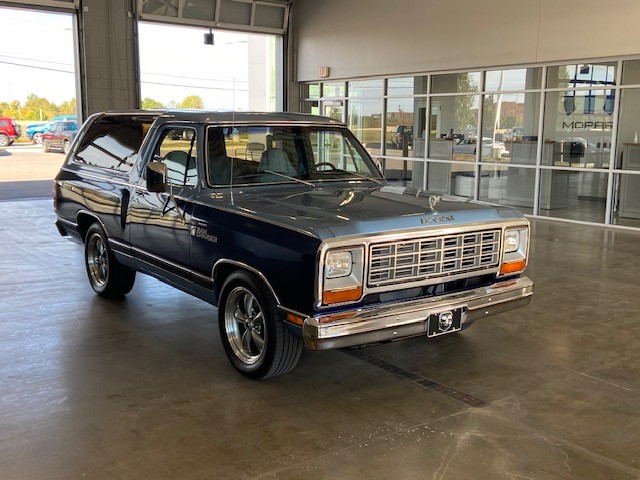