I originally found this truck abandoned in a field in 2013. I applied for title at a cost of $6 . I then had it towed home for $40. It had not been licensed or on the road for five years. The thing that intrigued me was the fact the truck was whole, all parts in place. Some body work was needed but most of all it had no rust on it anywhere including the under carriage which is very unusual for a vehicle in the state of Utah. It was originally dark blue, faded, interior faded and shot, all tires flat, 3 foot of weeds growing around it, Mice nest on top the engine. My first thoughts was it was parked for some simple mechanical issue the previous owner never bothered to check into. I was able to inflate the tires, add battery and gas and found it was not getting power to the ignition. The problem was the plastic electrical switch to the clutch was broke so I removed the switch and hard wired it and truck started right up. I drove it up and down my street, it ran great and drove like a new truck. I then tore the truck down to the frame with the exception of the engine and cab. Over the next couple of years, time permitting, I meticulously detailed out the truck. The motor was only taken apart far enough to detail and paint. No work needed to the motor, transmission or transfer case. It was a painstaking but fun project. I did replace new: tail gate, grill, bumpers, gas tanks, sending units, all electrical switching, heater core, AC, radiator etc… back to the original Holley 4 bbl carb. The truck turned out so nice. Drives and feels like a new truck. This could not have possible without our friends at LMCtruck.com who supplied parts I could not find anywhere else. Thank you, 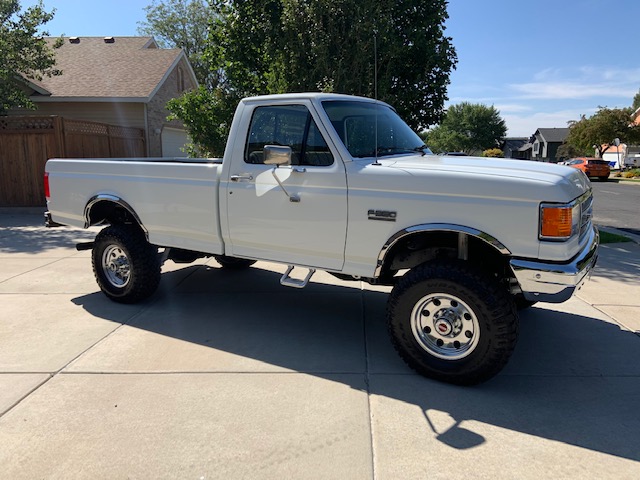