I have loved this truck for 25+ years and now my son loves it too….Like Father, Like Son! In 1992, I purchased this beauty brand new and it served me so well over the years as I drove it to work daily and kept it clean. Then, after suffering from sitting in the hot Texas sun for so many years the paint began to show its wear. I bought a new Chevrolet Avalanche and turned this old Silverado into a work truck. We used the truck on many trips to our East Texas property clearing dead trees and loading them into the truck bed (albeit not too carefully) for hauling off. Not being my daily vehicle anymore, it was driven seldomly but still served a great purpose when called upon.

In 2001 our son, Kyle, was born and he quickly bonded with the truck. Soon after being able to walk and talk, there was Kyle in his car seat riding in the truck. He always wanted to ride in the truck whether we were going to the local dump, picking up mulch, “cleaning” our East Texas property or just for a ride. I remember when he was just 2 he said for the first time “I love my Daddy’s truck!”. “Nice to know now let’s back to work” I would say in passing. There he was tossing branches in the bed while my wife and loaded log after log of dead trees. As the years went by the rather worn looking truck just kept on going and Kyle kept on riding, always happy to hop in it. When he was 8 years old, Kyle started saying “I want my Daddy’s truck when I am old enough to drive”. I explained “You have 8 more years to go before you can drive and no telling what vehicle you will want then” .  I considered selling it so many times as it was a third vehicle for us in a two driver family. But, sometimes I would think to myself “what if” someday he really wants my truck. At age 14 Kyle finally convinced me that he really did want my truck! He started working a part time job, while attending high school, and saved virtually every cent which went along way to showing his commitment.

We soon began our restoration project! His grandfather installed a new (not rebuilt) stock 5.7L engine straight from Chevrolet. I paid for all the mechanical needs but Kyle kept our agreement to pay 50/50 split for what I called the “pretties”. I was so happy to hear him say that he wanted to keep the truck nostalgic with the same color and shiny chrome vs. the current trend of black wheels, black light covers, etc.. The “pretties” included removing 53 small dents (maybe we should have been more careful loading dead trees in the back), a new paint job and replacing virtually everything on the exterior. Thanks to LMC Truck for the parts, we replaced the grill, all lights, all rubber components, all moldings, all mirrors, all handles and even all emblems, the last of which was the must have “CHEVROLET” on the tailgate! With the original interior in pretty good shape, we worked a bit on the dash and replaced the headliner. At age 16 with his newly acquired driver’s license, Kyle became the proud owner of his Daddy’s truck! Kyle has also added the teenage boy’s “must haves” to his truck with a great bass rumbling exhaust system coupled with a stereo system heard around the block. Those items were on his dime, not mine but boy does it look good, sound good and run good!

Now, Kyle and his truck have virtually become one. Rarely does more than a day or two go by that Kyle is not cleaning and shining up his truck. The local car wash knows him well and loves to see his truck…they even give him special discounts! Everywhere he goes, strangers ask to buy it. They come into his place of work and want to know who owns the beautiful truck outside. Even when offered substantial money to buy his truck, Kyle always says “It’s not for sale, no amount of money can replace this truck”. Going to a Texas high school with another 6,000+ students, most kids know Kyle as “you’re the guy with that cool old truck” as he smiles from ear to ear! When the typical High School Senior pictures were taken in the studio, Kyle begged for pictures with his truck. The studio finally agreed and now we have some great Senior pictures of Kyle and his beloved truck, some at the park and some at Texas’s #1 burger joint, Whataburger! Kyle’s favorite is him in his truck at the Whataburger drive-through.

Kyle plans to keep his truck for many years. However, he recently noted that someday he will get a new Chevy truck. I cringed the first time he said this as I couldn’t bear to hear him say he would get rid of it someday…how he could do that! Of course, Kyle quickly followed with “Maybe I will have a son and he will want his Daddy’s truck”. Hmmm…”what if”, just “what if”…another Like Father, Like Son! 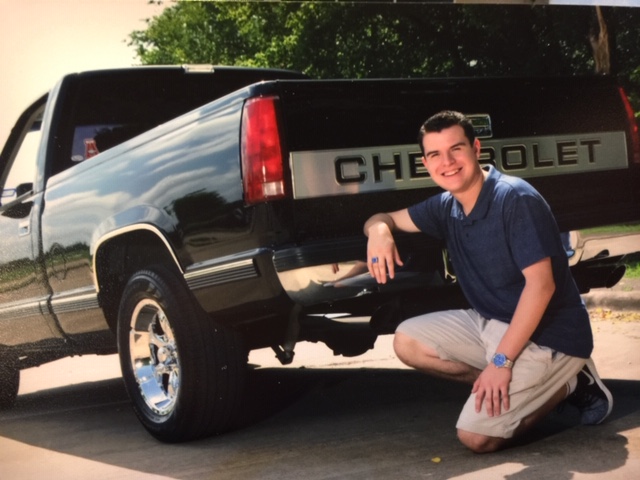