I recently bought a restored 1955 (second series) Chevy 3100 pick up from a dealer in Eugene, OR. I had a ’55 when I was 17 (nearly 50 years ago). I always wanted to replace it and finally got the chance. The restoration was started in 1992 by Howard T. The story is, he completed the restoration, contracted cancer and died in 1998. His widow remarried and they kept the truck for the next 20+ years; finally selling it last August. I bought it in December. I don’t have a lot of history on it yet. I know it was assembled in the Oakland, CA plant and was the 1649th off the production line. I’d like to know where it was originally sold and who the owners were before Mr. Thomson. I don’t know how much was done to the truck after Mr. Thomson passed away. Before I bought it the dealer had updated the exhaust system and added wheels and tires. I believe this is an ‘antique restoration’ of an antique vehicle. It’s really a solid frame-off restoration. It has a ’71 Chevelle front clip, a chromed out 350 V8, Edlebrock carb, TH400 trans, 9″ Ford rear end, PS, PB and AC. Since I’ve had her, I’ve updated it to LED lighting. She’s a beauty – I call her ‘Ruby’. 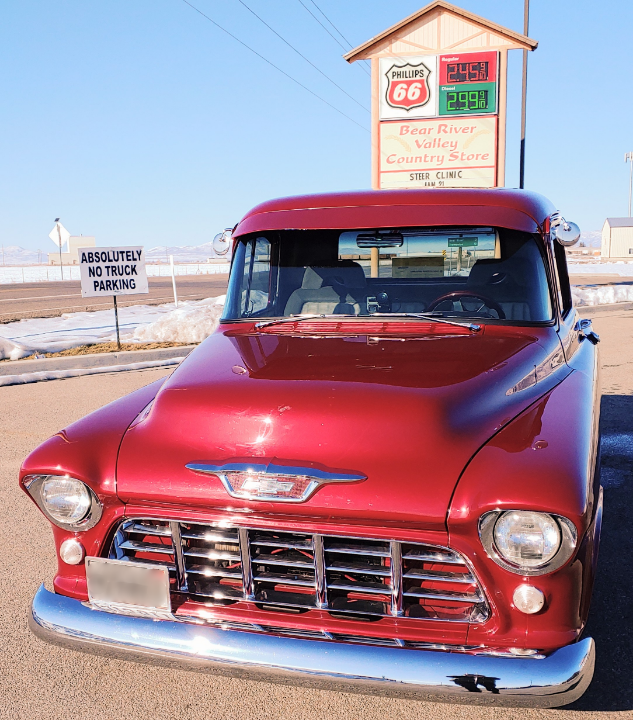