Dedicated To My Dad

Not too long ago, in the spring of 2015, my Dad was in the hospital. While he was there, he and I talked a lot about the good old days, the days when his kids were young (times that I was about seven years old) and the trucks were well built. Back then, we lived in Missouri and he owned a red 1949 Chevy. As we conjured up the old days, the memories came back to me and I told him I remembered that red truck. He loved that! We could talk about that truck and other past vehicles of times gone by. He loved to talk about them, but the Chevy was the main focus during our talks. He described the red truck in such detail, he loved it and it was a great memory. The time during hospital visits slipped by easily as we shared our passion for the old red pickup. The more he reminisced about the truck the more he missed it.

One day, with great excitement, Dad asked me if I would do him a favor—find a Chevy truck like the one he had, back in the day. His excitement was contagious and I naturally agreed to find that truck.

I started to quiz my Dad about the condition of the truck he wanted, did he want stock? “No,” Dad replied, “I want a red, five window, all custom, V8 motor with all the custom trimmings!” Again, I said “Okay, Dad, I’ll get it for you,” I contemplated how I would find the truck he wanted, and I added “but it will take some time.”

The search began. Months went buy searching different websites for the very specific 1949 red Chevy. Whenever I found something, there would be problems that required major rebuilding. I knew this would be a project, but it couldn’t be a total refurbishment. So, I kept on searching. I had to find the dream truck, at least one that had the potential to be what Dad had in his mind. Finally, about 400 miles away, a truck showed up that sounded like it could be the one, and so I decided I would take a road trip, clinging to the mere possibility that this would be the right 1949 Chevy.

Immediately when I laid my eyes on the truck I saw the potential, but also saw that it would require hours and hours of work. Of course it wasn’t just the work, there would be a lot of expense too. I had to step back and calculate how much it was going to cost to rebuild it. Hoping I wasn’t biting off more than I could chew, I made the purchase.

Now the real work could begin. I hauled the 1949 Chevy truck home and began salvaging all the usable parts I could. As I worked on the truck, I shared the progress with my Dad. As he worked on getting his health back, we dreamed about how this truck would look once it was done. My Dad was getting really excited about showing off the ’49 Chevy in the car & truck shows. He had confidence that the final outcome would be a real head-turner. Our already close bond had grown around this truck.

After months of hard work, finally, the body, paint, wiring and the new engine was done. Dad said he wanted it all custom, so honored his wishes. I added power steering, power windows, vintage air, stereo system, custom wheels and interior along with a new oak bed to the old truck. It was a challenge for me, but I wanted it to be perfect for my Dad. I wanted it to be the ’49 Chevy pickup that we dreamed about together. I wanted it to be the vehicle that he loved back in the day, but better–the truck he dreamed that truck had the potential to be, back in the day. I believe that truck is the one you see here in the photos.

I’m so sad that my Dad passed away before the truck was finished. He didn’t even get to sit in it. It remains a dream we shared together. I have the truck completed now and I still have the memory our times dreaming of it. You know what I believe though? I believe, he is looking down at his 1949 custom red Chevy pickup truck and he is so proud of it. Sometimes when I get to thinking about those times, I can almost see him driving it with a big smile, all proud and happy… and I’m sitting right there with him, just loving the time in the red ’49 Chevy pickup. 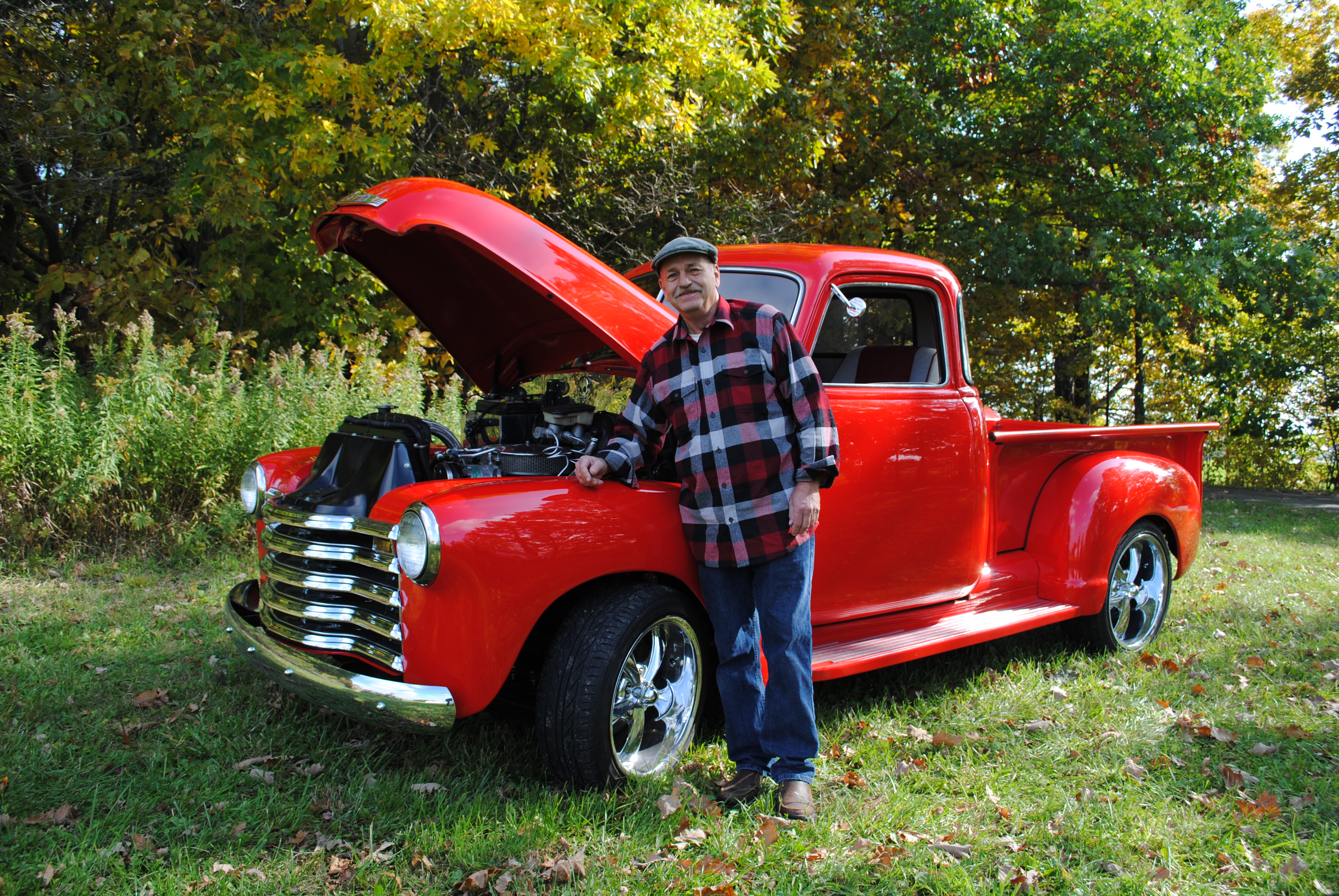