Previously owning 4-5 ford trucks ranging from 67-75 and a whole lot of emptiness in my heart not having one sitting in my driveway, I decided to start my search for a bump side 67-72. Because the wife knew what I was up to, it made it a whole lot easier to begin a search. I thought it was going to be much easier than I had expected. It started with a 72 4×4 that I had my heart set on. Problem was is that it was 4 different colours and a whole lot rustier than anticipated, now moving into our first purchased home in a new neighborhood of freshly built homes and polished new cars made the wife start to hate the whole idea of this truck adventure I was set out to achieve. My dad ended up buying it instead because he too liked the truck and it was only $500. I was really into finding a half ton or a 4×4 in and make and model but I realized almost instantly that these trucks weren’t as easy to dig up as they were ten years prior. I searched and I searched, then I came across an add on a local site of what appeared to be a 3/4 ton 1969 pickup. I contacted the gentleman who later set up a viewing of the truck 2 weeks later because of his busy schedule. Waiting and waiting impatiently to see the truck hoping it was better in real life than the pictures I finally got to see it. It was a 1969 ford ranger camper special fully loaded in its original two tone orange and white paint. Ok so it needed a few things but 95% of the chrome was there and the box was actually holding water. The owner told me it had a camper on it it’s whole life up to a year ago and that’s what saved the box and the drip rails on the cab above the windshield from rusting out. The front of the box was straight as an arrow because nothing had ever hit it. I paid the man $950 and got her towed home. I then started gathering parts from local sites like inner fenders, 4 barrel intake manifold, and a 1976 rad support that basically bolted right in to the 69!! Bet ya didn’t know that they were ford fans. Finding a rad support for an earlier model is unheard of. So new headers and dual exhaust went in on the 360 with stacks behind the cab coming up through the box for maximum annoyance through some thrush cherry bombs mufflers to make friends around the new neighborhood which was kinda a must considering the loud Harley across the street was already in motion. A new gas tank from LMC truck was purchased and installed because ol’ faithful wasn’t living up to her name at any means with 6 tow truck hookups and tow bills later. It seemed every time I drive it I towed it. Thank you LMC! All new brakes, lines, wheel cylinders, axle seals and a new master cylinder went in and she is a true champion. Now only if I can make the wife a believer that she will be reliable is my next adventure. 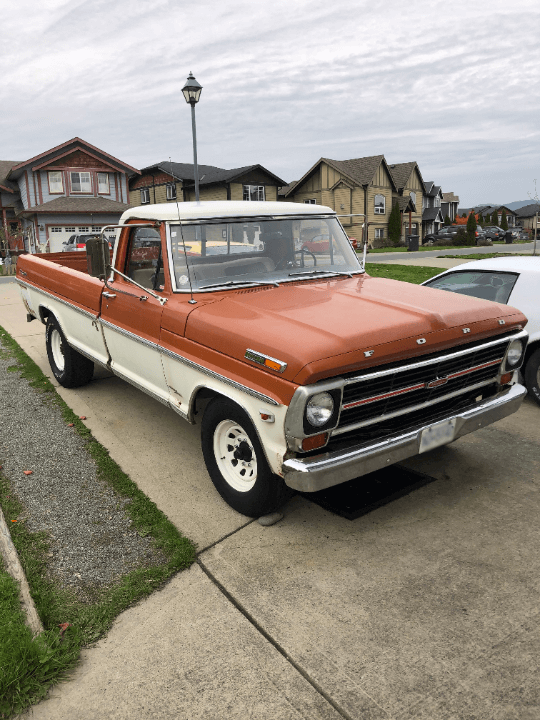