I saved Ethyl from a scrap yard in Phoenix, Arizona 25 years ago. At the time, she was on the original, uncut long bed frame as a rolling shell, no engine, transmission or interior. I paid $1500 and dragged her home with a clear AZ title. The original plan was to leave her on the stock frame and suspension, throw in a big motor and a 5 speed and turn her into a stock looking hot rod. I added a power steering conversion and a front disc brake kit, but the handling was horrible.

Ethyl had some nasty bump steer, the kind that would make her change lanes. At the time, she had a 350 V8 and a 200-4R automatic and there was no way I would have felt safe with a bigger engine under her hood. I finally decided to do “like everyone else” and cut the frame to install a Camaro subframe up front. The Camaro subframe took car of the handling issues and the bump steer nightmare was gone, but Ethyl was now a low rider. This was something I never really wanted for her and after a few years, I just wasn’t happy. I remembered a friend in high school who had an original NAPCO 4wd and realized this was what I wanted, a truck that looked like a TRUCK.

Now her NAPCO was the real deal, geared to the moon, able to drive straight up walls, suspension like a Sherman tank and a top speed of 45 mph with an engine that sounded like it was trying to hover. In short, it was all business. Ethyl needed to be enjoyable to drive, so no leaf springs at all four corners for her. In the end, I decided on a second generation Dodge Ram 1500 4wd chassis as a viable donor. The frame width was similar to the 1957 Chevy, and a standard cab had more than enough wheelbase to fit Ethyl’s 97″ long bed.

I found a good donor truck in Texas for $400, with a bad motor. Everything else was there, axles, transmission,transfer case, etc. I brought the 1994 Dodge Ram 1500 home and began to strip off all the parts Ethyl wouldn’t need. I also took her cab off the Chevy frame and began taking detailed measurements to get the correct wheelbase and locations for the body mounts. The Dodge frame was shortened 11.25″ in the middle and the Dodge body mounts were recycled to provide a quiet body-to-frame union. Pedestals were fabricated to raise the cab mounts to the proper height, since the Dodge had a stepped frame, unlike the Chevy and Ethyl’s cab was mated to the Dodge frame and was capable of having a full depth bed floor.

The donor engine was junk and another 5.9L Magnum V8 was sourced. I found a 1996 OBD-2 wire harness and computer to run the Magnum’s MPFI fuel injection, and stole the power brake and rear wheel ABS system from the donor truck as well. Ethyl now has modern fuel injection,a modern braking system, four wheel drive and a comfortable ride. Next up is the paint and body work. When done, Ethyl will be back to her original turquoise green with a white cab top. 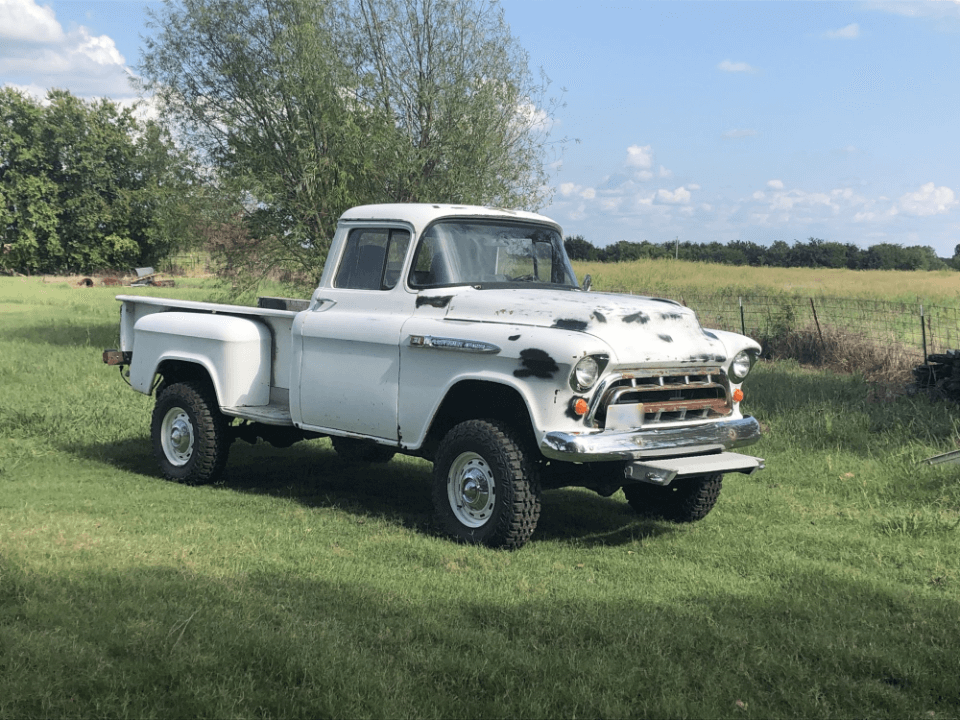