I found the truck while pheasant hunting near Freeman South Dakota. It was parked in the trees on a farm, the owner was not home but his son was there. I told him I was interested and after some email tag, I bought it for $450. and brought it home the following March. I had never restored or helped restore a vehicle before. So this was going to be interesting. I had been a mechanical person all my life. I thought it would be fun to give it a shot. LMC was a great source for all the parts I needed. This is an F3, but I knew it would use the same cab parts as the F1. I brought it back in 2003 and had it in a 5th of July 100 year parade in 2005 at Salem South Dakota. I didn’t have a place to restore it and was talking about it in the bar I went to near my home. One of the regulars said he had a building that I could rent space for $30 a month. “SOLD!” I think there were people in the bar betting I wouldn’t finish it. The gentleman who painted it said it was the only one he painted that was finished. It was overwhelming at times. Replacing the electrical wiring was a real challenge, I have an electrical background, which made helped. I found a wiring diagram and traced and marked all the wires that were left, and eventually, I had the whole truck rewired. The engine was stuck, but after pouring diesel fuel down each spark plug hole and some down the carburetor, it did break free. I pulled the heads off and the cylinders looked fine. I removed all the carbon and put it back together with new gaskets. I never did start until 3 days before the parade I had entered it in. I found the distributor was off one cylinder, and it fired right up. 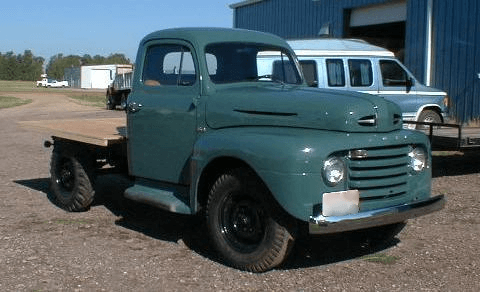