The first question everyone asks “is this a factory crew cab?”
The answer starts like this, the truck was ordered by a Chevrolet dealer in Redfield South Dakota for a local doctor. The purchase price was $4263.03 of that $1257.18 was for the “Stageway Coach 6 man crew cab” option. The truck was built at the St Louis assembly plant then shipped to Fort Smith Arkansas where Stageway Coaches did the crew cab conversion which was completed on March 31, 1965. It spent the next few year’s road hunting pheasant among other duties pickups were used for.

In the early 1970’s the truck was sold to a gentleman I purchased the truck from who used it in his house painting business. As with all Midwestern trucks the climate and road salt were not kind to the truck. While looking for a short bed project truck my nephew stated he knew where a “crew cab” pickup was that might be able to be purchased. In late 2007 the deal was made.

Not liking the proportions of the super short bed one of the first things done was to lengthen the frame so a 6 foot box could be used. The cab was completely rebuilt repairing the floor and rocker panels. A N.O.S cab back panel was used to repair the rust in the cab corners. As with all of the Stageway’s conversions the roof inner liner and rear door interior panels were made from Masonite. My goal in building the truck was wanting it to look as if it could have been done in house at Chevrolet using 4 donor roof tops cutting the inner liner panels into pieces to fit together to make a factory looking steel headliner. The rear doors were the most challenging, they were never made by GM. By using door shells modified to fit the opening, when completed able to use a shortened version of the inner panel to match the front door. After a number of failed attempts to come up with a hidden hinge of the rear doors Will Keimig of Keimig Body Shop came up with the solution that works perfectly using late model GM pickup hinges.

Wanting to keep the outside & inside of the truck to look as if it could have been done by GM in 1965, the exterior color is 66-69 Corvette Rally Red with the interior and dash using paint codes form the mid 1960’s. Staying with that theme the front seats, mirrors, and fuel injection emblems are from a mid 60’s Corvette. The steering wheel is an original 1965 Corvette teakwood version. The power comes from a GM performance parts LSX 454 with 620 HP and a 4L80E transmission. The original 12 bolt is now fitted with a 342 gear and a posi track. Vintage air keeps the inside of the cab cool and blows thru a factory air conditioning bezel. The original ash tray form a factory air conditioned truck was also installed to complete the look. Schott “Americana” wheels 20 x 8.5 inch in the front and 20 x 10 inch in the rear running BF Goodrich G-Force tires.

The whole idea of this build was to take a crude version, by today’s standards of conversion, and make it look inside and out as if it could have been built this way in 1965 with modern fuel injection power. The bed wood in this truck is the most prized of all. My dad’s hobby was woodworking. We had the black walnut cut into lumber over 30 years ago with the intent of a father/son furniture project that never happened. As the truck neared completion the black walnut was plained and milled into bed wood. My Dad laid out where each board would go. There is no stain on the boards it has numerous coats of the same PPG clear coat that covers the rest of the truck. Sadly my Dad never got to see the truck or his black walnut wood finished. So the days when we show the truck I know he is looking down and very proud of the finished result.

As with any project, life and lack of funds sometimes put trucks on the back burner. At the Goodguys show in Lincoln, NE in 2017 the truck was chosen as the “Hot Hauler” award. Again in 2017 at the Goodguys show at Texas Motor Speedway in Fort Worth, TX was chosen as the LMC Chevy Truck pick and at Goodguys in Des Moines, IA in 2018 it was again chosen and the LMC Chevy Truck pick. 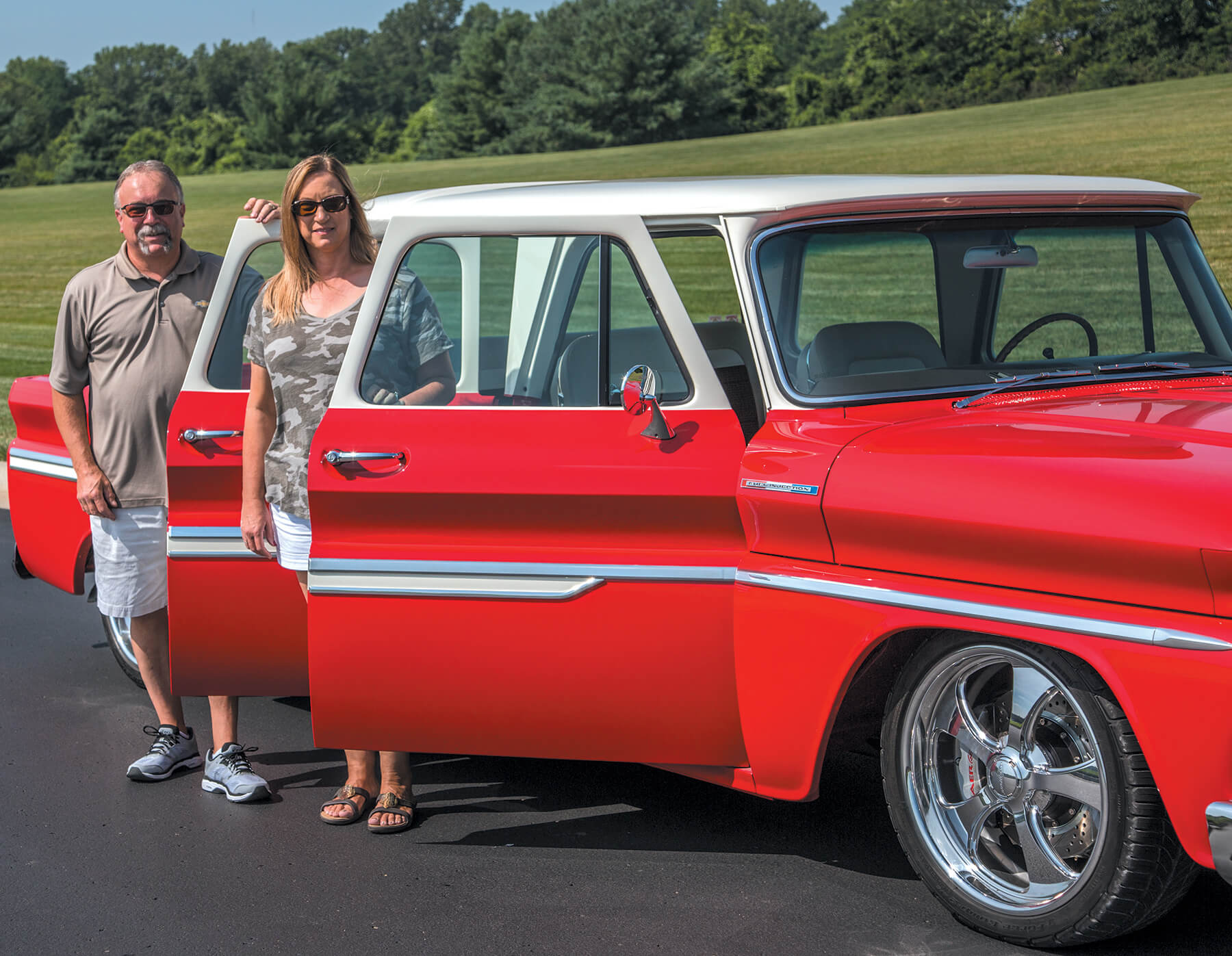 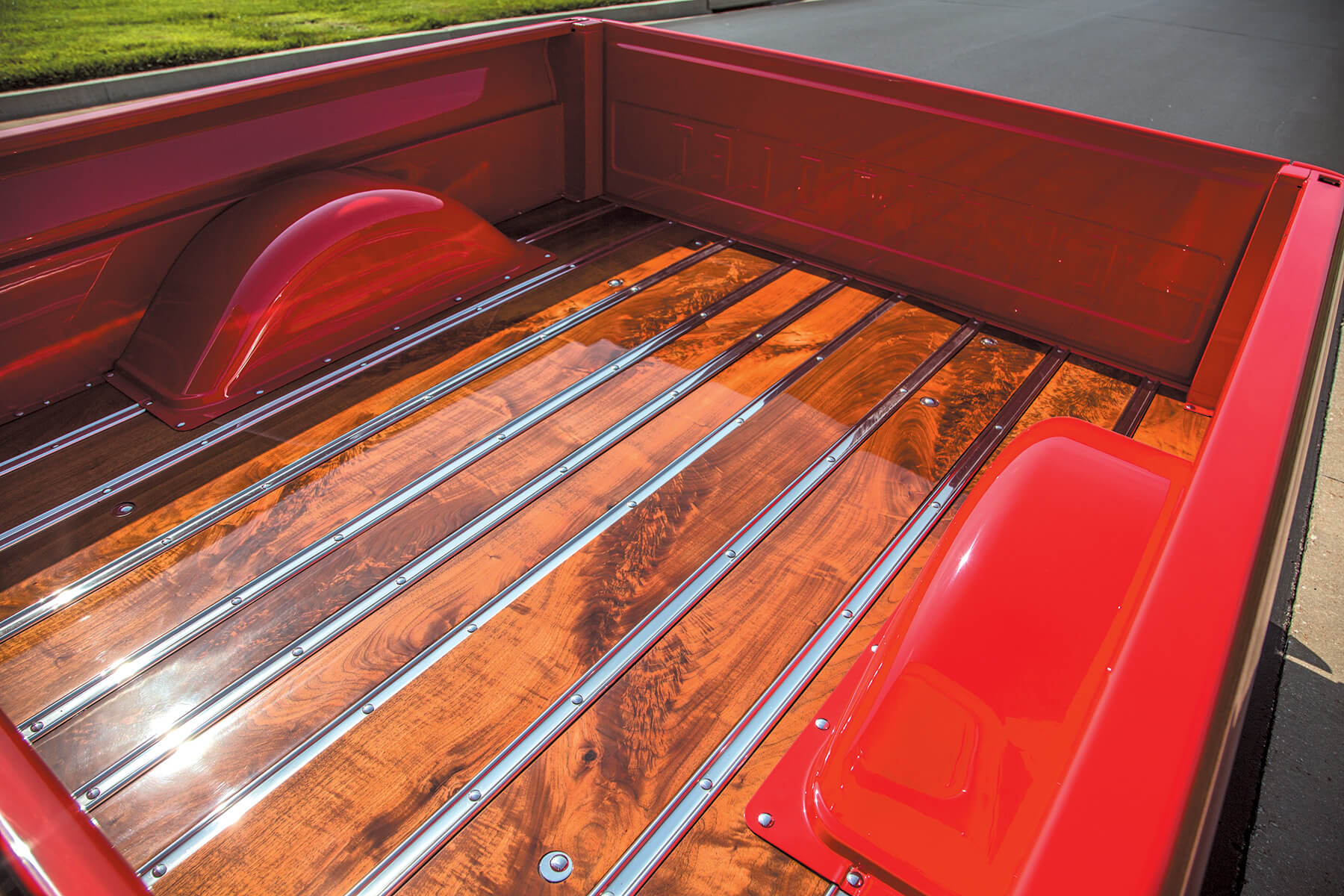 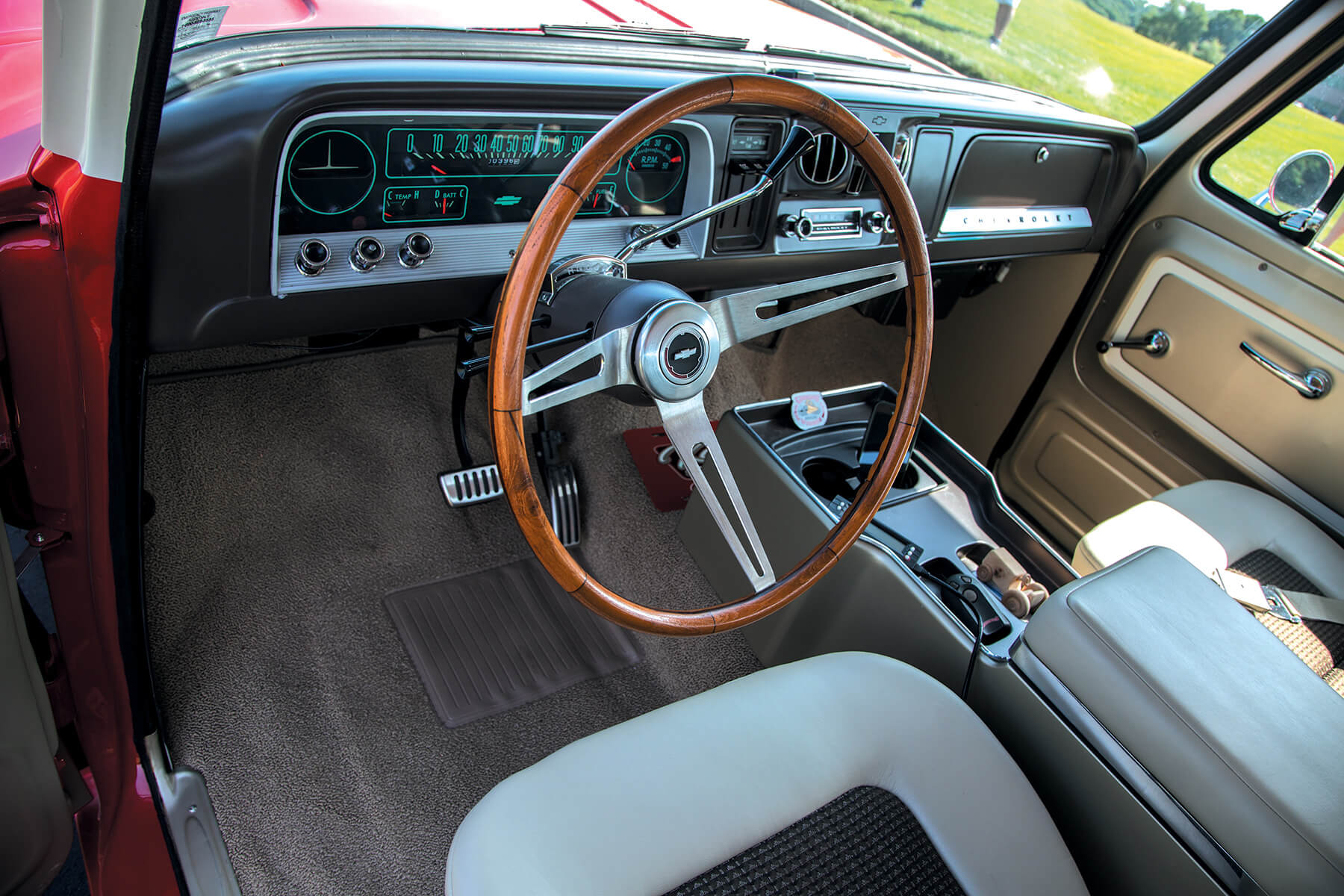 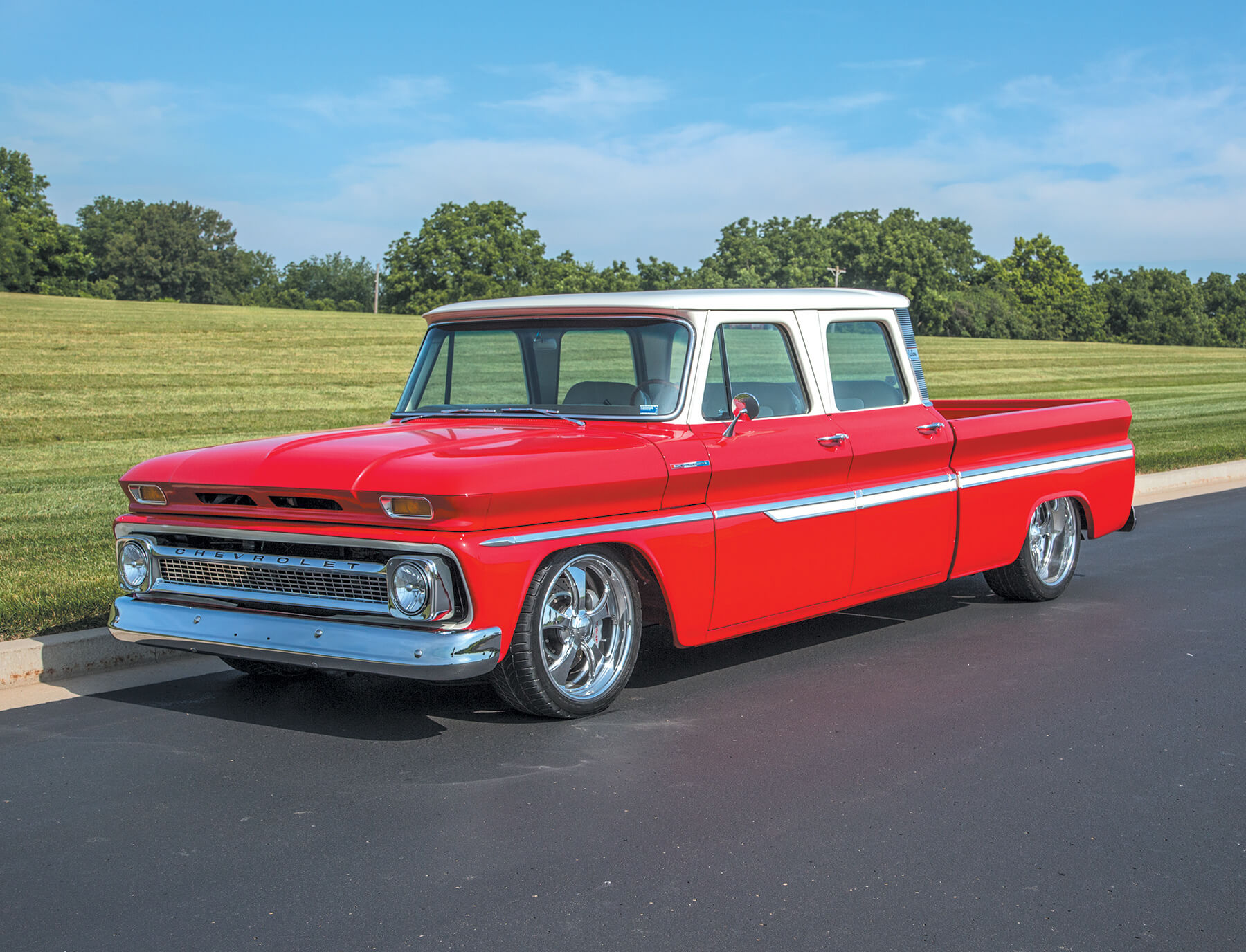 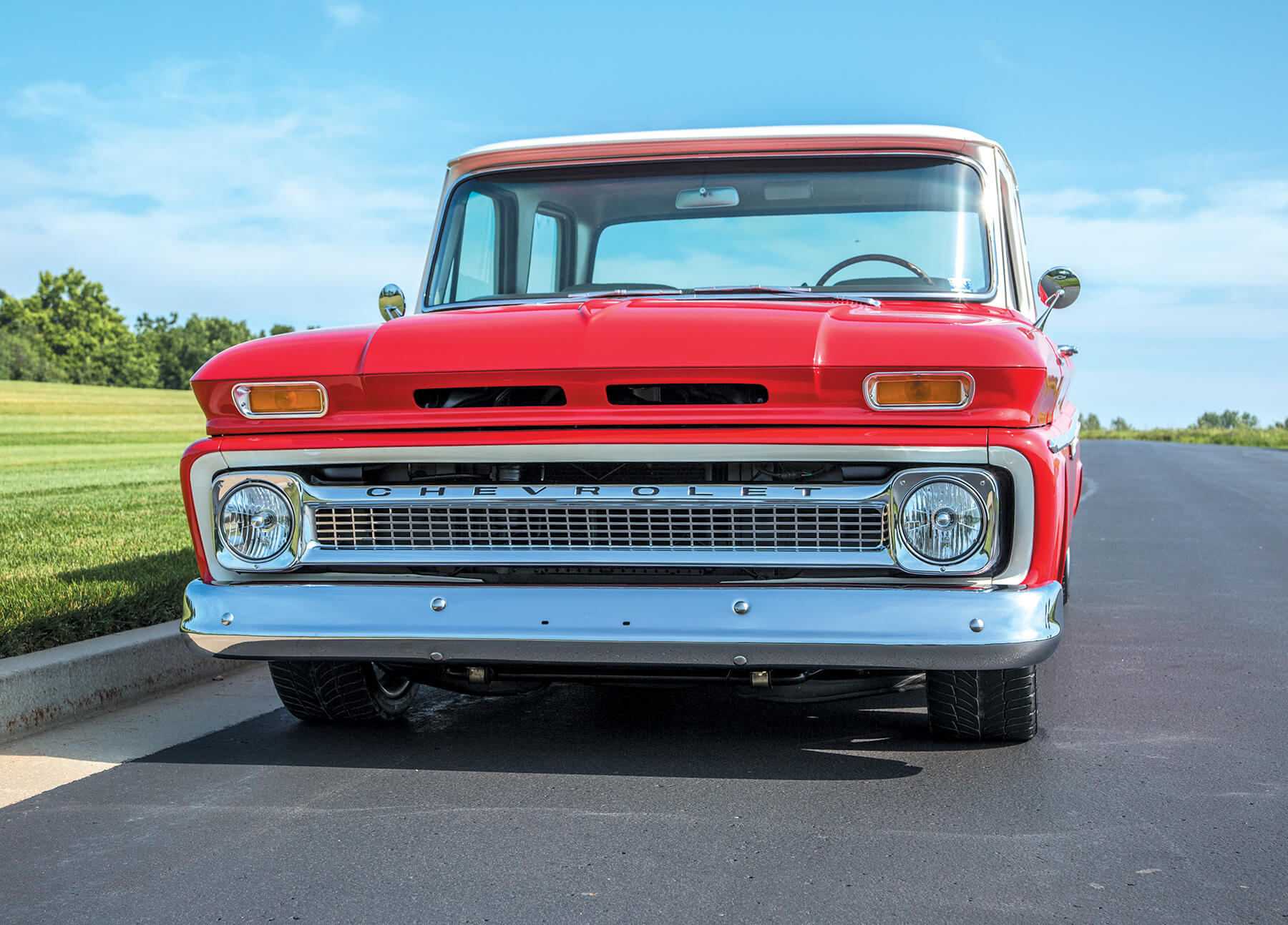 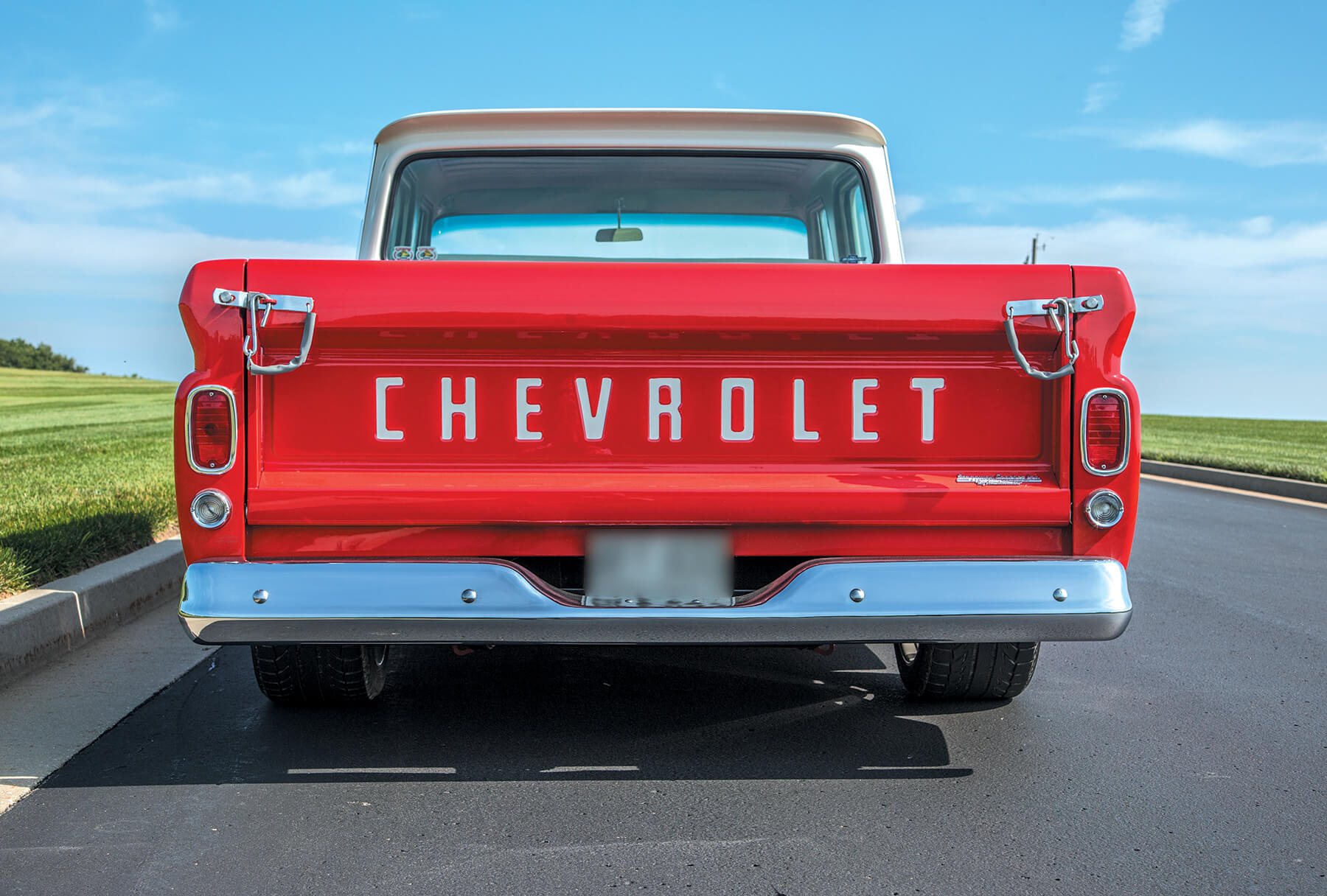